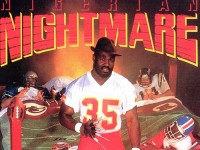 A University of Washington graduate whose football team had the best defense in the country at the time, Costacos came up with the idea of making a "Purple Reign" T-shirt to honor the team, featuring a lineman in a purple jersey falling from a cloud in the sky. Costacos printed up the shirts, traveled to a road game at Stanford one fall weekend and sold them in the parking lot. The idea was brilliant. By the end of the first week, he later estimated he had sold 20,000. An idea was born. Along with his older brother, Tock, he parlayed those T-shirts into series of sports-themed posters that, like that first T-shirt, played on pop culture. Together, they created one of the most influential businesses in the history of sports marketing. Its lasting impact eventually would extend all the way to a New York City art gallery, where, 25 years later, those posters were viewed as art and sold for thousands. At one show Ultimate Fighting Championship president Dana White bought the entire gallery collection.