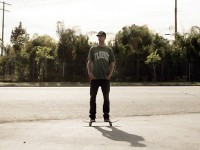 Desillusion magazine and Nixon proudly present their latest video instalment “This is Andrew”, a video portrait paying tribute to US street skateboarder Andrew Reynolds. Growing up in a small town in Florida, Andrew started skateboarding at a very young age. Due to his exceptional talent – Reynolds won the first contest he ever entered – he drew the attention of the skate industry and landed on some of the top sponsored teams as a teenager. Following Tony Hawk and others to the Californian epicentre of skateboarding at the age of 18, he met fellow skateboarders like Jim Greco, Ali Boulala and Knox Godoy, later on known as the “Piss Drunx”, ruling the streets of LA.